The “Zenrinji-Eikando” is especially popular in the fall. It is the vintage temple which has been handing down the merciful mind of the Amitabha (a Buddha for indefinite light and life) since a back into the Heian-era (794-1185). Inside the Temple, starting with the principal image, the statue of the Amiabha which is called, “Mikaeri Amitabha”(the Amitabha is looking aside as if it is taking care of people who come behind him), there are many highlights to see, such as the Eikando’s (another name for Zenrinji after the 7th Buddha priest of Zenrinji, Eikan) , the 7 wonders and the national treasure, Yamagoshi-Amida-zu ( Amitabha is coming over the Mountain scroll). Well, let’s see each highlight of the Zenrinji-Eikando more in detail.

What are the most crucial characteristics of the Zenrinji-Eikando and its highlights for sightseeing? 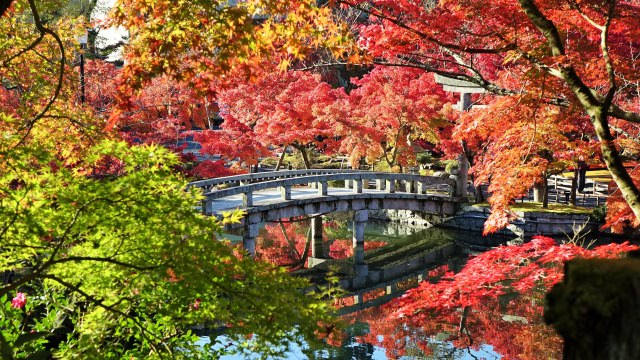 Against the Higashiyama(the mountain range), starting with the Amidado (the temple hall containing an enshrined image of Amitabha), the historic buildings are matching well to the garden blessed with trees and water. The expression of “Eikando with Maple trees” has spread nationwide and you can only see those magnificent changing colors of maple trees here. The first highlight for sightseeing is the principle image, the statue of the Amitabha.

This Amitabha emerged when the wise priest, Eikan was chanting a prayer and he started leading Eikan walking in front him. Speaking to Eikan who was astonished with this happening, the Amitabha said, “Eikan! You are late.”, looking back. That figure, looking aside made this statue be called “Mikaeri Amitabha”. You can also see other Buddha statues which can give good deeds, such as the Binzuru-Sonjya statue. (When you stroke the statue, you’ll be freed from your illness.)

Also, you can see the master piece of Shohekiga (paintings on paper sliding doors) in the Momoyama-era (1573-1603) , such as “Taketora-zu” (bamboos and tigers) painted by Tohaku Hasegawa and his clan which is famous for the novel design and colors. The temple possesses many treasures, such as the national treasure, “Yamagoshi-Amida-zu” or the important cultural property, “Tima-Mandara-zu”(Buddhist visual scheme of the enlightened mind).

Now, you need to know which places you should visit, don’t you? Each one of the places exhibit the profound history and the culture. Why don’t you visit them, following in this order?

1. The “Shakado”in which the Shakanyorai (the Buddha founder) statue has been enshrined 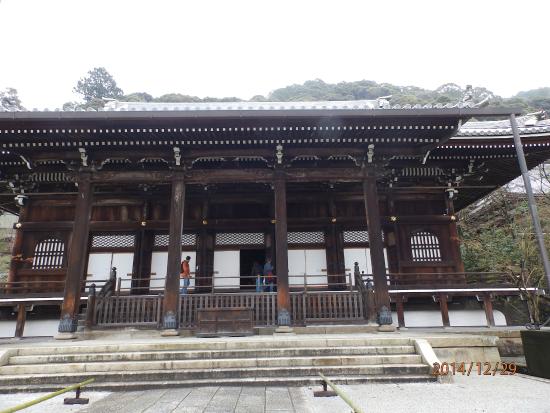 “Shakado “ is the most popular spot among the buildings in the Zenrinji-Eikando. The name came from the setting that the “Shakanyorai statue” had been enshrined in the front central room. It was established by the Emperor Gokashiwabara in the Muromachi-era (1336- 1573). The inside of the building was designed in Shoin-zukuri (the style of traditional residential architecture). The study and the lounge were central in the house. It is the base of the traditional ordinary Japanese houses.

The fusumas (a thick papered sliding door for partitioning rooms) are decorated with the gorgeous fusuma paintings, such as “Shocho-zu”(a pine-tree and birds) and “Gunsen-zu”(the group of the legendary wizards living in the mountains and capable of performing miracles.) It is a very elegant space. Can you imagine it? In the front garden, there is Mori-suna(the ceremonial pile of sand) and it is also one of the viewing attractions, but I’ll tell you about it more in detail in the next column.

2. The “Kara-mon” ( a large gate with a peculiar Japanese gable) where the Imperial messenger cleansed himself 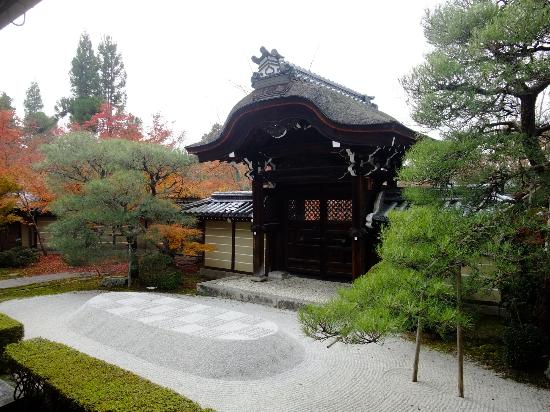 This “Kara-mon” used to be used when the Emperor’s messenger went in and out of the building. The prosperous atmosphere is magnificent and it is truly worth seeing . Between this “Kara-mon” and the “Shakado”, there is the ceremonial pile of sand. The Emperor’s messenger cleansed himself with this sand, stepping on it and then proceeded into the building. If you see the sand closely, you can recognize the beautiful patterns on the surface. The patterns are called Ichimatsu-moyo (checked pattern). Do you wonder how they have been kept like that all the time? You can find it out when you visit there! 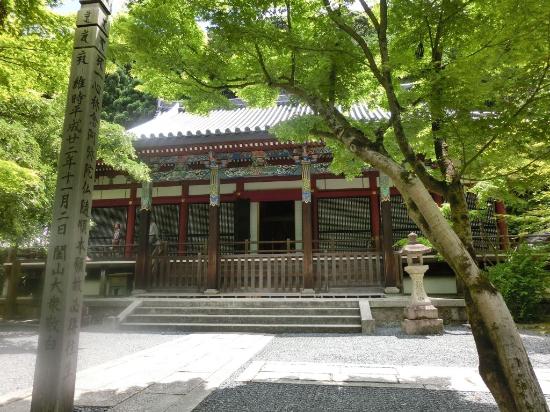 That’s it! The principle image, Mikaeri Amitabha has been enshrined. As the name shows, the Amitabha is looking aside and this posture is very rare as a Buddha statue. The inside has been decorated with the brilliant colors and various flowers have been drawn on the ceiling. It is overwhelmingly gracious! This is the highly recommended spot to stop and have a look.

4. The “Taho-to” surrounded by the beautiful scenery 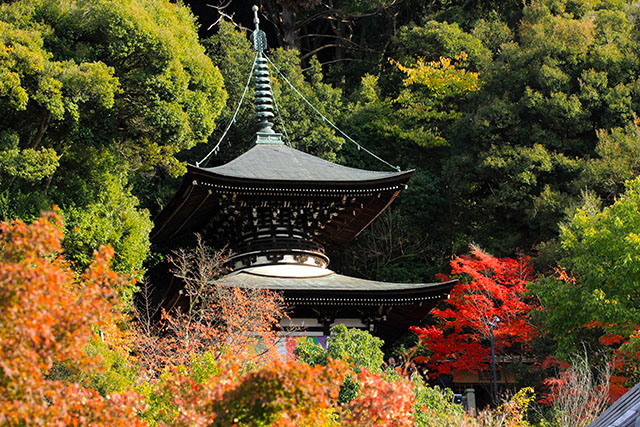 This Taho-to has a great popularity among many other features in the Eikando. It is located in the highest place in the garden which is half way up Mt. Nyakuoji. Therefore, you can see clear across the town of Kyoto from the top of the tower. It is exciting, isn’t it? When it is the changing color season, such beautiful scenery spreads as far as the eye can see. You mustn’t miss it!

The best highlight is the colored maple trees after all! 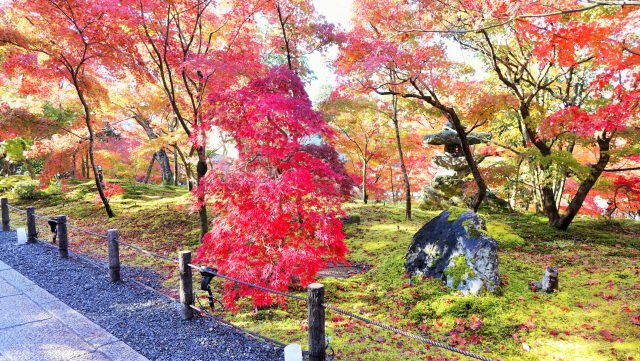 The Zenrinji-Eikando has a lot of attractive features, but the most well-known beauty is the magnificence of the maple trees in the fall. This place is bustling with many sightseers during the changing colors season. You might be intoxicated with the beautiful maple trees, wherever you stroll in the garden. The locals in Kyoto say, “In fall, the maple trees in the Eikando”. They are unbelievably beautiful! If you’d like to visit the Eikando, you must choose the “Fall”!

What are the 7 wonders of the Zenrinji-Eikando?

The painted sparrows on the right Ranma (wooden panel above a paper sliding doors) lack one of them. It is said that it must have has flown away!?

It is believed that the plum trees were planted by Eikan to rescue people. When the plums bore fruits, he gave them to the poor sick people. The plum trees came to be called “Hidenbai” unnoticeably and now only one of them has been miraculously surviving.

This corridor connected to the Kaisando is tremendously winding and it looks as if a dragon is stretching out. When you actually walk on it, you feel as if you are walking inside the dragon, which is a very strange sensation.

These pine needles were split into three which is very unusual. It’s said that when you put one in your wallet, money comes in and if you put one in your wardrobe, clothes come in. Sanko means wisdom, charity and sincerity. You can have one for free at the souvenir shop in the Eikando on your leaving. How wonderful it would be!

The frogs in the garden sound like mokugyo (the fish-shaped wooden drum used in a Buddhist temple). Many people heard their singing, but nobody never saw them.

Many buildings were burnt down in the fire during the Onin-no-ran (the ancient civil war 1467-1477), however, only this Amitabha has survived.

This maple tree has been growing on the steep slope at the back of the Eikando. It is definitely worth seeing.

The Zenrinji-Eikando is inviting you to come and see its 7 wonders!

Which part of the Eikando attracted you? The tower or the Amitabha? Starting with Mikaeri Amitabha and the 7 wonders, the Eikando has a lot of attractive features.
You can enjoy visiting at any time throughout the year, but it is best in the fall after all. I hope you will make a plan to visit the Temple in the fall when the changing colors are at their best. I’m sure you’ll be amazed with their beauty.