“The attractiveness ranking of prefectures in Japan” from “The Area Branding Research Survey 2018,” held by Brand Research Institute, Inc. shows that Tokushima is ranked 46th…, coming in second-to-last of all 47 prefectures.
This result was very disappointing for Tokushima. However, there are a lot of tourist attractions which perhaps make Tokushima “the dark horse of the Japanese tourism industry.”
There are no such big amusement parks like TDL (Tokyo Disney Land) or USJ (Universal Studios Japan), but you can find places which are new to you in Tokushima!

One of the three mysterious regions of Japan, “Iya-no-Kazura-Bashi” 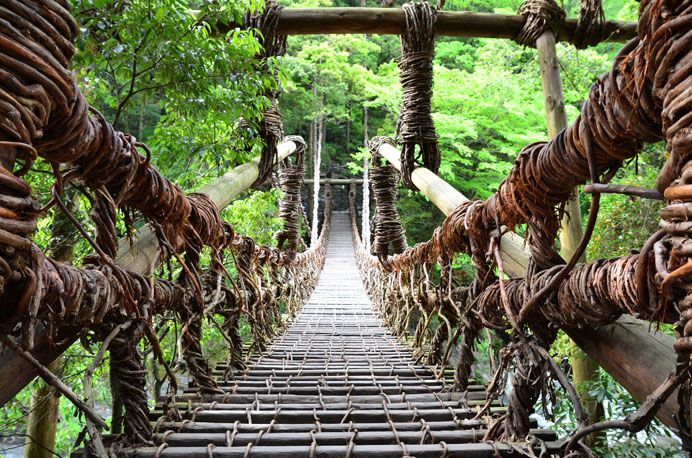 “Iya-no-Kazura-Bashi” (a suspension bridge made of vine) is one of the most popular tourist spots in Tokushima, and has been designated as a national important tangible folk-cultural property.
The Heike clan (also known as the Taira Family) lost a battle between the Minamotos and the Tairas at the end of 10th century, and it is said that some of the remnants of the Heike Clan fled to this place.
This bridge was built by those refugees, and the reason they used vine for the bridge is that it can be cut if pursuers were to come here.
There is a waterfall called “Biwa-no-Taki” (Waterfall of the Japanese Lute) on the other side of the bridge, and one legend says that the remnants of Heike Clan played biwa and recollected memories of their old city, Kyoto, here. 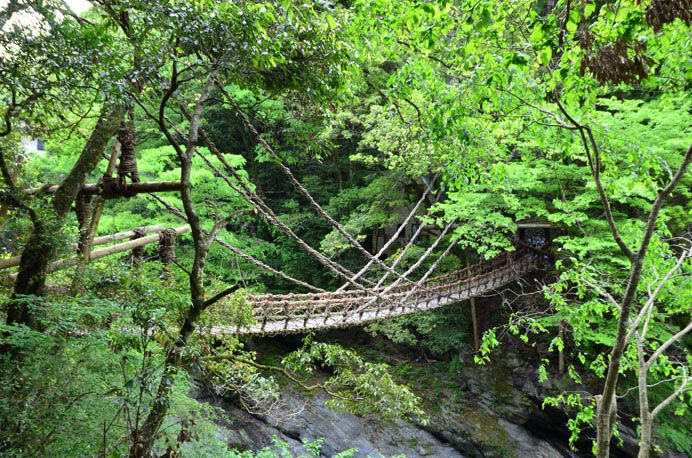 The length of the bridge is 45 meters.
Maybe you will feel small when you see the whole view by yourself.
However…, please be prepared before you across the bridge!
You might feel pretty scared when you go across the bridge, as the gaps between the slabs are pretty wide, and the bridge is shaky!
You cannot turn back once you start crossing the bridge, so just look forward and don’t look down.

“Ochiai-Shuraku” (Community of Ochiai) a.k.a. The Community in the Sky and the Lodging Experience at an old Japanese-Style House with a Straw-Thatched Roof. 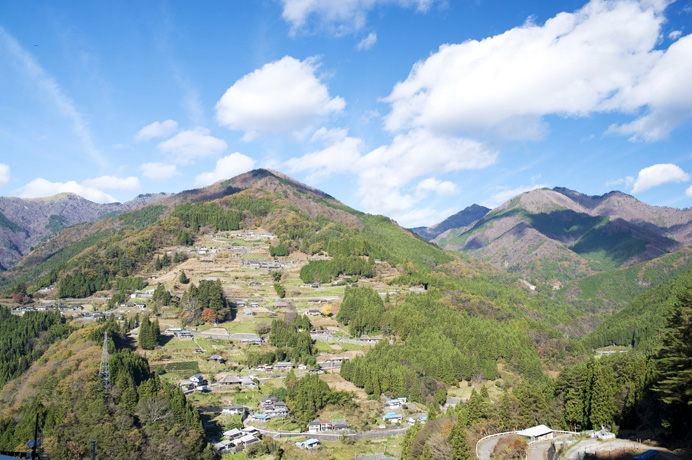 There are some places which remind you of old times in Tokushima.
Actually, Alex Kerr, the American scholar of eastern culture, loved the scenery of the remaining mountain villages reflecting the old Japanese way of life – and introduced it to the world.
He also established “Chiiori,” where people can stay and experience life in the countryside at an old Japanese-style house with a straw-thatched roof on a mountain slope in Ochiai-Shuraku, located in the center of Higashi-Iya area. 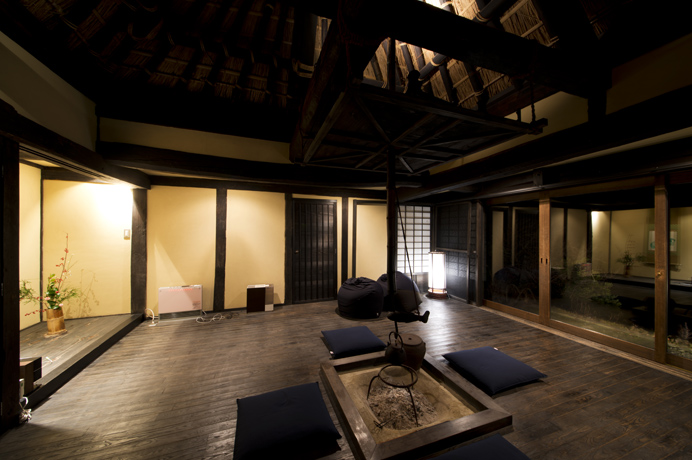 There are 8 houses used for accommodations, and one of the houses, “Fusho,” is located in the highest spot on the mountain in the picture above.
A room with an open hearth is now a very rare thing even in Japan, but at the same time, you can stay comfortably with air-conditioning, floor heating, and Wi-Fi.
You can feel the different but traditional and authentic atmosphere, compared to Machiya (traditional townhouse) in Kyoto, or some of the old buildings in other castle towns in Japan.
This is the popular place among foreign tourists who want to discover the taste of the old Japanese lifestyle.

“Ningyo Joruri” (Traditional Japanese puppet show) will show you the world of emotion.

It is very interesting that old buildings, culture, and customs still remain in the areas situated in the deep mountains or on isolated islands in Tokushima.
For example, there are open-air stages called “Nouson Butai” (agricultural village stage ) on the ground of shrines, and most of the remaining stages are in Tokushima. 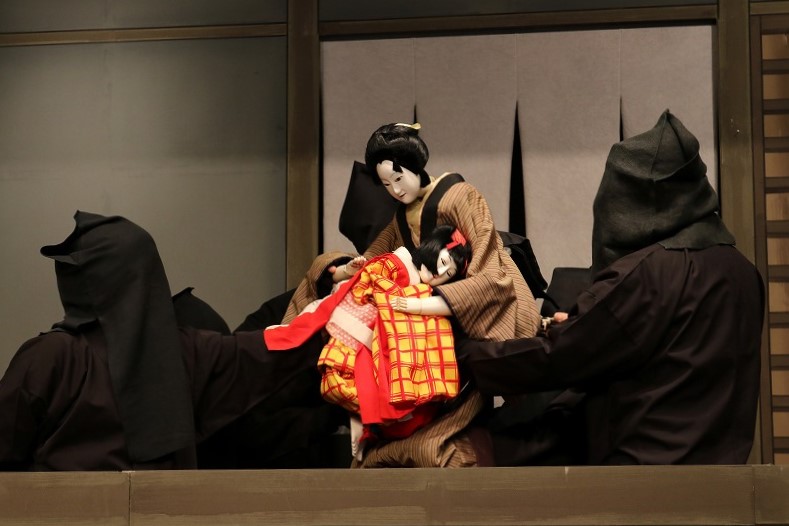 Performances for “Nouson Butai” are only done once or twice a year, so it is pretty hard to see the performances in the village.
However, “Tokushima Prefectural Awa Jurobe Yashiki,” a puppet theater and museum, is the best spot for you to see a traditional puppet show.
You can enjoy a performance here every day, and the program is “Keisei Awa-no-Naruto,” the story of a mother and her daughter who are tossed about by fate.
This is well-known joruri story in Tokushima because the characters are citizens of Tokushima, and the love between the mother and daughter is described touchingly. 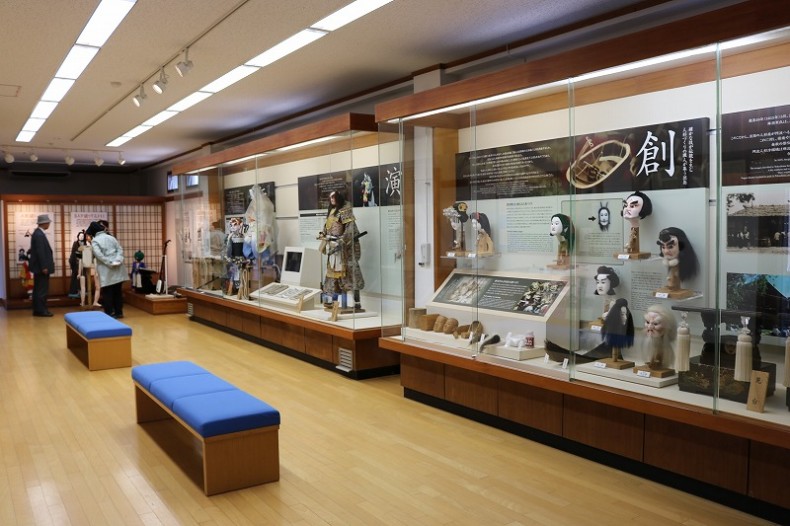 You can look at the details of ningyo joruri more deeply in the exhibition room.

Maybe it is hard to understand what kind of story is being told during the performance (even for Japanese), but we think you can feel the unique groove of Japan from this joruri! 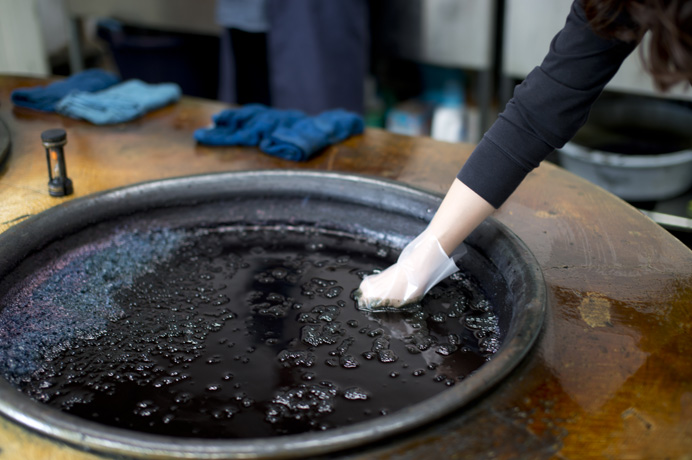 The base of culture in Tokushima was built by merchants of indigo in the Edo period (1603-1868).
Tokushima has long been famous for the production of “sukumo,” the dye made of fermented indigo leaves.
Sukumo was sold at a price even higher than rice, and so Tokushima became a big city and even ranked in the top 10 cities in Japanat the beginning of the Meiji period (1868-1912). 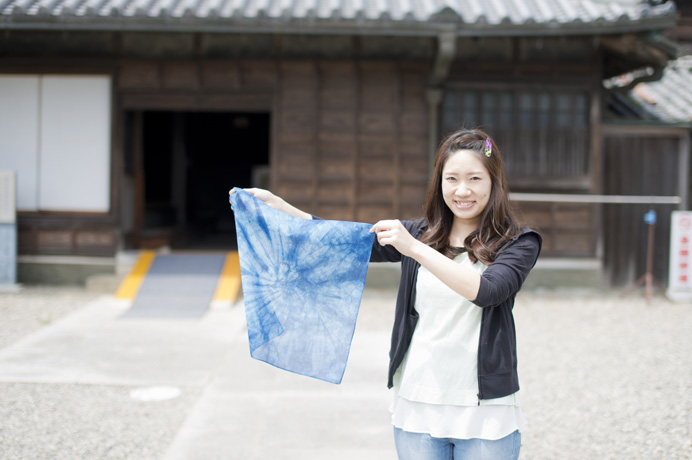 A checkerboard pattern with color of indigo blue was selected as the logo for the 2020 Olympic and Paralympic Games in Tokyo. So now Tokushima is working hard to introduce the attraction of Japan Blue by holding various events.
You can experience indigo dying without worry at “Ai-no-Yakata” (Hall of Indigo) .
It is really worth it to see the moment the color changes into a vivid blue.
It is just like some kind of magic after you wash the dye with water and the color appears as it touches the air.

Go to “Awaodori Kaikan” to see an Awa Odori performance and to get souvenirs from Tokushima! 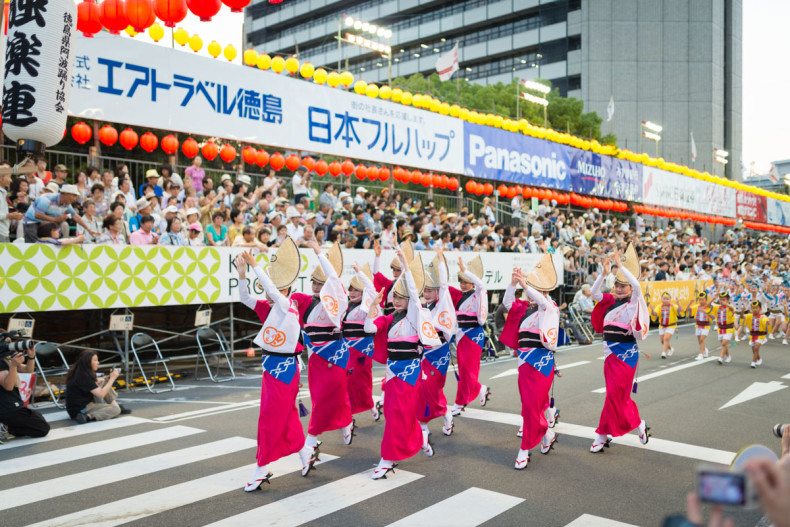 The most popular event in Tokushima is definitely “Awa Odori” (Awa Dance: “Awa” is the old name of Tokushima).
The Awa Odori festival is held annually from the 12th to 15th of August in Tokushima City.
If it is possible for you to come visit Tokushima during these 4 days, please do so. But there is another way to enjoy Awa Odori, any day of the year!
You can see a great performance of Awa Odori, and even learn how to dance it at “Awaodori Kaikan,” located just south of Tokushima Station, only 10-minute walk away. 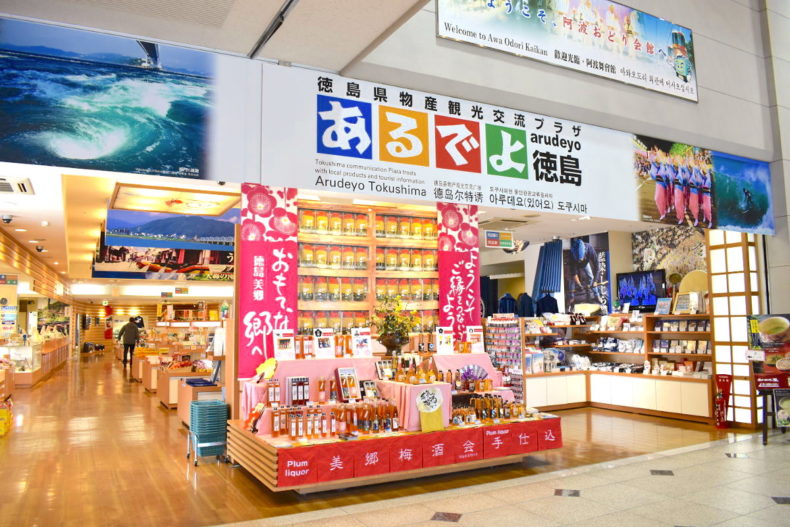 “Arudeyo Tokushima” is the souvenir shop on the ground floor of the building, and there are so many kinds of souvenirs from Tokushima, such as sweets made from Naruto Kintoki (sweet potato) or sudachi (lime), Tokushima Ramen, Otani Pottery, and indigo-dyed products.
Maybe this is a must-visit spot for you before leaving Tokushima.

Actually, these spots are for beginning sightseers of Tokushima.
There are many more interesting and “deep” spots in Tokushima, so maybe we will introduce you to them next time!