The Best Souvenirs In Iwate! The Top 10 Local Products You Can Get!

The Tohoku region is located in the northern part of Japan. Because the unique cultures and customs have been developed in this region, a large number of visitors is recorded every year. In this article, I will introduce the best 10 souvenirs you can get in Iwate. I hope it helps you choose the one! “Kamome no Tamago” is a castella manju made by “Saittou Seika” with a concept of gulfs that fly above the sea of Sanriku. With the ingredients including “Otebou (beans)” and “Kitakami wheat”, sweet bean paste of egg yolks is coated beautifully with white chocolates.

It looks just like a bird egg, but tastes quite mild combining Japanese and Western. They sell the seasonal flavours such as the ones with marons and apples in each season, and also “Kamome no Chocolan” which has a chocolate flavour. This product has been loved by the locals for so long. One of the most popular items at “Sawagiku”, chain stores mainly in Kuji City, is called “Busu no Kobu”. It was named when the owner loved the sound of the word.

Whereas it sounds quite unique, the taste itself is amazing. It is a Japanese confectionary with butter and sweet bean paste baked in a high temperature – so the outside feels quite crispy and sween bean paste is not too sweet. You can have it either just as it is, or bake it again in an oven.

“Benkei Chikaramochi” is a popular item made by a confectionary shop in Hiraizumi “Yoshinoya”. Musashibou Benkei has a strong connection to Hiraizumi, and thus the episode of Benkei has reflected to this confectionary. Since its opening in 1915, they have kept their original taste of Benkei Chikaramochi with sweet bean paste containing plentiful walnuts and covered with soft mochi. It tastes quite mild and you can have it as much as you want!

There are other popular products such as “Apple Pie” which one of the popular apple brands from the selected farms is used as the ingredient. Why not try them now?

One of the most popular items from “Kaishindo” in Oushu City, Iwate, is a sweet jellied adzuki‐bean paste called “Iwatedo Youkan”, reflecting its original and traditional making method. They offer more than 10 different flavours such as the basic one “Honneri”, “Ogura” that you can enjoy the real taste of azuki beans, “Kurumi” – walnuts with white sweet bean paste.

Of all, “Kuroneri” is what Kaishindo proudly has been offering! So many regular customers visit this store to get Kuroneri. Try different flavours and find your favourite! “Koiwai Farm” in Iwate is one of the most popular destinations full of attractions to be enjoyed no matter how old you are! Once you are here – “Koiwai Farm Cheese Cake” is what you must get and take it home! “Shoeidoh”, established in 1903, is a long established confectionary shop in Ichinoseki, Iwate. Of all items, trying this one bite size dumplings, “Gomasuri Dango” is strongly recommended. It seems to be a simple Japanese confectionary with the sesame syrup covered with dumplings, but when you bite it, the syrup comes out of the dumplings and it tastes great!

Other than the sesame ones, they offer a wide range of flavours; matcha cream and zunda cream. So, this has been extremely popular! When it comes to Iwate, “Maezawa Beef” is something you cannot forget. Especially Maezawa Beef Miso – the one produced by “Akanuma Shouten” in Hanamaki City is made with 100% Maezawa Beef and is literally the best!

From the miso itself, you can feel a rich taste of Maezawa Beef! Sweatness comes first in your mouth, then a slight spiciness comes next. This mild spiciness gets you addicted to this product for sure! How about getting one for souvenir? 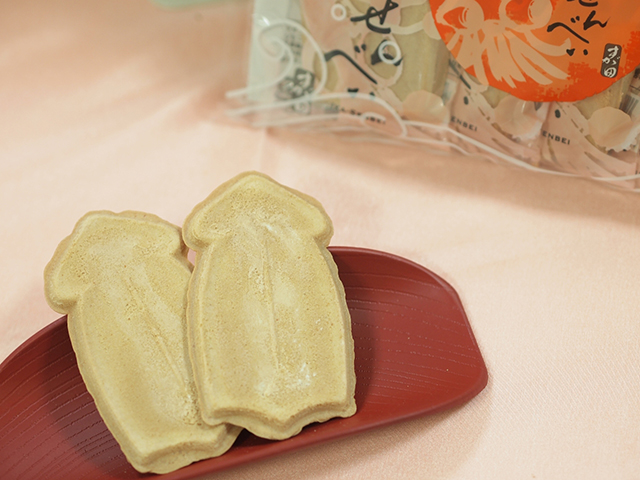 A long established shop “Sugata”, opened in 1881 in Miyako City, proudly offer a popular item called “Original Ika Senbei”. You might recognise the name of “Ika Senbei” as other regions also have them, but actually, this Original Ika Senbei is simply the deep fried squid unlike the ones in other regions. For the ingredients, they use only the squid caught in the Sanriku area.

It has a strong taste of squid and the sea with slight sweetness – the more you chew, the stronger taste it gets, which is just like a “Surume Ika (dried squid)”. They are all handmade with the crispy and hard texture! “Kasai Farm” in Ichinoseki, Iwate has been producing and offering this beautiful tea product “Kasaikunchi no Goboucha”. Kasai Farm has proudly been making the safe vegetables with a suitable method for each one of them. Kasaikunchi no Goboucha is all handmade taking time from the cultivation to the making process.

Burdock contains a lot of dietary fibre and the tea reflects its natural sweetness. Women seem to prefer this tea for their health and beauty, but of course this is something men, kids, and even elderly people would love! You can actually have it cold, but be aware that in some season they can stop selling it. A patisserie “Tarte Tatin” in Morioka City, Iwate – as its name, Tarte Tatin is one of the most popular items here. However, “Kozukata Baum”, being a discontinued production for some time, has finally come back with the “Yagisawa Shouten”‘s return! “Kozukata Baum” is a Baumkuchen containing an unrefined part of soy sauce from Yagisawa Shouten.

It feels so soft and an unrefined part of soy sauce is adding the flavour! The dough is always double-baked and that makes a stronger smell of soy sauce. Take it home with you to enjoy!

The Best 10 Souvenirs You Must Get In Iwate!

How was it? In Iwate, where there are a lot of historical places to visit also, people prefer Japanese confectionaries and thus they can be a great souvenir. In addition, other local products including the ones with seafood are something you must look at. If you have a chance to visit Iwate for any reason, find your favourite!