Top 10 Tourist Attractions & Best Things to Do in Fukuoka, Japan

Fukuoka is the gateway to the Kyushu Province. Recently it has become more and more popular. As it is geographically close to China, Taiwan and Korea, visitors from overseas besides Japanese tourists have been increasing. It is the place from where you can see the fantastic dreamy scenery. Once you see it, there is no doubt that you will want to visit there again. The Miyajidake Shrine” suddenly became the talk of the town after the Arashi (the male vocal group) performed on the TV commercial of the JAL.

The Torii (a large gate that stands at the start of the front approach to a Shinto shrine) which has been standing in the sea and the Shrine has been connected with a straight path. When the sun is going to sink into the sea, the beautiful sight in front of you is beyond description.

The sun just above the sea lights the Torii and the path brightly. It goes through the another Torii of the Shrine and reaches to the grounds of the Shrine. Can you imagine the dreamy lit long straight path from the sea to the Shrine? Its beauty is breath-taking.

You will understand why this Shrine is so proud because it tops the worshippers in number in the Fukuoka prefecture. You can’t miss this deep emotional experience! 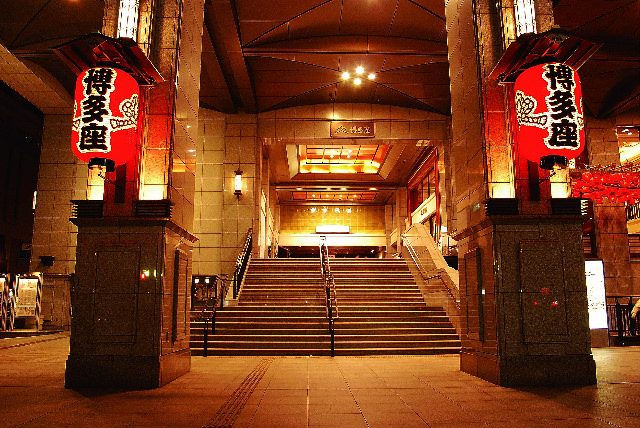 It’s one of the enjoyments of a trip to watch the country’s traditional culture, isn’t it? So, this is it. The “Hakataza” is a theater for drama use only which has been run by the city council.

It occupies the 2nd floor to the 6th floor in the Hakataza-Nishigin Building, as the main tenant of the large-scale complex commercial facility, “Hakata Riverain”.

The programs differ depending on the time and the date, so you need to check it in advance. Why don’t you enjoy a Hakataza’s packed lunch, while you are watching the performance? It is a traditional way of watching a play. 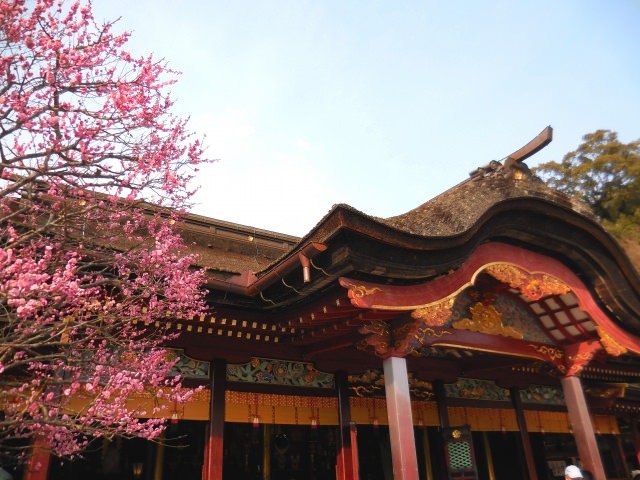 In the Heian-era, he was unjustly accused by his political enemy and was sent into exile to Dazaifu. He bade his farewell to his favourite apricot tree in his garden before he went to Dazaifu. But the legend says that the apricot tree missed him very much and followed him to Dazaifu over night.

The apricot tree in the legend has been named “Flying apricot-tree” and it has been seen on the grounds of the Dazaifutenmangu. If you see it with your eyes, you may believe the legend.

The “Dazaifu Amusement Park” is next to the Shrine. It is an inexpensive and homely amusement park which is a nice place for families with their children to enjoy themselves. It is a well-known shrine as the “God of a safety drive”. It has enshrined the Munakata 3 goddesses and has been appointed as a national important cultural asset. Originally, it was believed to be a God of the sea, but nowadays, it has been believed not only as a God of the sea but also as a God of all sorts of traffic.

If you carefully observe the stickers on cars on roads in Japan, you can often find ones written the “Prayer for safety driving – Munakatataisha”. It shows how widely the Shrine has become well-known.

The “Shinpokan” in the Munakatataisha has been keeping the Munakata Family history. It has exhibited about 80,000 national treasures. It is one of the candidates as a world heritage site. It is quite hopeful, but whether it will be appointed or not, it is a solemn shrine which is worth visiting.

■Information
Name: Munakatataisha
Address: 2331, Tashima, Munakata-city, Fukuoka prefecture
Access(1): a 20-minute-ride from the Wakamiya IC on the Kyushu Expressway
Access(2): from the Togo station to the Munakatataisha bus-stop using a bus heading to Konominatohatoba
Website：http://www.munakata-taisha.or.jp/ 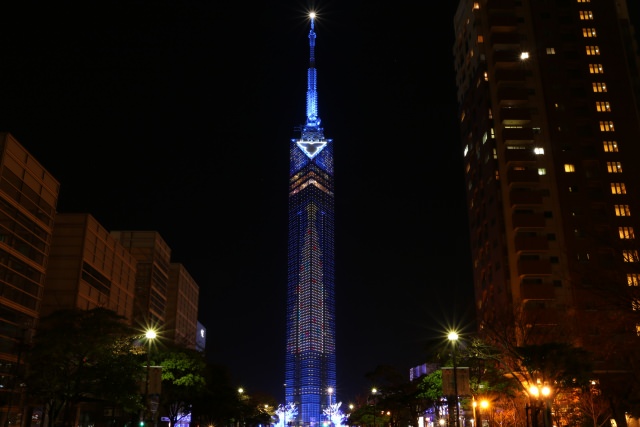 It is 234m high with a crystal appearance to make people look into the future. When you look at the tower in the distance at night, the illumination may not go away from your eyelids even if you close your eyes.

From the Tower, you can see the night-view which is as beautiful as the ones among the Japanese 100 beautiful night-views. The fantastic sight of the Fukuoka-city and the sea from the 123m height is a highlight.

→The 10 Best Places for Stargazing in Fukuoka, Japan

You May Also Like:
→Top 10 Tourist Attractions & Best Things to Do in Hakata, Fukuoka

→The 10 Best Places to Eat in Kyushu, Japan 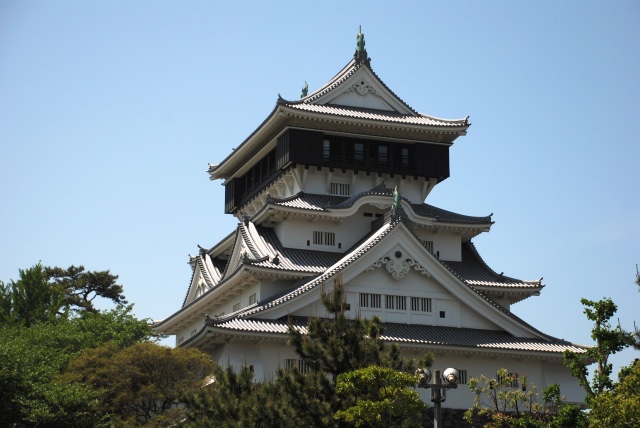 There may be many people who have already known about it, but as of 2016, no castle can be found in the Fukuoka-city. But don’t be disappointed, you can see a Japanese Castle, the “Kokura Castle” in the Kitakyushu-city in the Fukuoka prefecture.

This Castle was built in 1602 by Tadaoki Hosokawa. The 5th floor is bigger than the 4th floor which is called “Karazukuri”. There are few castles which have this “Karazukuri” architecture with the tower in Japan. 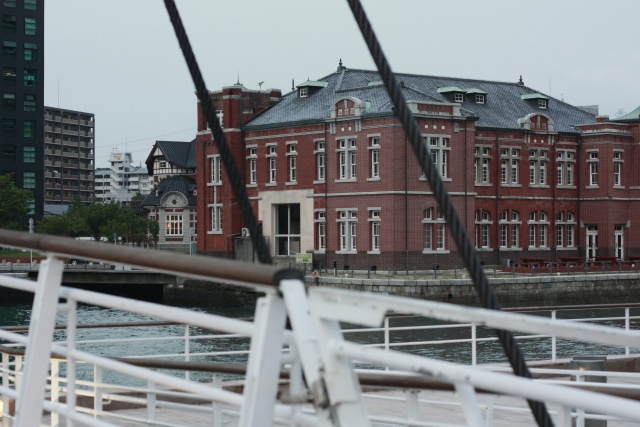 If you want to see the beautiful street where you can feel the Taisho-era charm, please visit the “Port Moji Nostalgic” area. Around the JR Mojiko station, the atmosphere of the old Port Town has been reconstructed. You can enjoy the nostalgic town as if you were in the Taisho-era.

This beautiful scenery has been selected amongst the 100 most beautiful town sceneries. There are many places to visit in this area, such as the JR Mojiko station, the Kyushu Railway Memorial Museum, the Kitakyushu-city former Osaka Merchant Vessel, the Mitsui Club, the Moji-ward Office, the former Moji Tax Office, the Idemitsu Art Museum and the Electric Communication Nostalgic Hall. Everywhere is perfect for a picture.

There is a famous food in the Mojiko Nostalgic area. The “Yaki Curry and Rice” is very popular. It is just the right food to enjoy after strolling around the beautiful town. The town has various events throughout the year. You can enjoy yourselves in spring, summer, autumn and winter. If you want to go out at night, the place has to be “Nakasu”. It is famous for an entertainment district for mature people. You can taste various types of delicious foods of the Fukuoka prefecture.

In Nakasu, many stands with the lanterns are dotted around. The sight is charming and just having a look at the view is one of the highlights of the Fukuoka sightseeing. If you come across your favourite food stand, please just pop in. Strolling around in Nakasu to find your favourite stand is the typical way on a Fukuoka trip.

→The 10 Best Places to Eat in Hakata, Fukuoka It is the largest amusement park in the Fukuoka prefecture. It is a theme park where people of all ages can enjoy themselves with a lot of attractions. They include the “Titan Max” with 1530m length and the largest descending angle is 60°, the “The Turn” which operates with the maximum speed 130km per hour and the gigantic Ferris wheel, “Space-eye”.

They have various kinds of events throughout the year. You can enjoy restaurants, cafes and souvenir shops there as well. The accommodation facility is inside the park. The plan for a 2-day-stay with a free pass for 2 days is very reasonable and convenient. You can experience an extraordinary time there. The Shiraito Waterfall with a 12m width and 24m height is about half way to Mt. Hagane, 900m above sea level. This waterfall is said to have been generating high-level minus eons which are very effective for relaxation. You’ll be comforted by just being there.

A lot of Yamame (a kind of trout) which only can survive in the clear water have been farm-raised there. Around the waterfall, the three 300-year-old Banryu maple-trees have been growing wild. They are protected as a rare species by the Fukuoka prefecture.

It is not only the spot for relaxation but also you can enjoy fishing Yamame and a Somen-nagashi (noodles are served in a bamboo pipe full of flowing water). If you get hungry, the “Shikinochaya” café is waiting to serve you their delicious wild plant foods.

Fukuoka prefecture has most things for you to enjoy, such as delicious foods, the historical streets, a variety of activities and the comforting spots. There is no doubt the Fukuoka prefecture will offer you what you desire to do. In order to make your trip to Fukuoka most memorable, please refer to this information when you make a plan.